Thanks to Lonely Planet’s travel guide and notes from Chris Kyriacou for some of this information.

The Vietnamese have had conflicts with the Chinese, the Khmers, the Chams, the Mongols and later came the French and the Americans. The most successful resistance against the French cam from the communists, first organised by HO Chi Minh in 1925 and at the end of World War II declared Vietnam independent. In May 1954, Viet Minh forces overran the French garrison at Dien Bien Phu.

Ngô Đình Diệm was the first president of South Vietnam. In the wake of the French withdrawal from Indochina as a result of the 1954 Geneva Accords, Diệm led the effort to create the Republic of Vietnam. 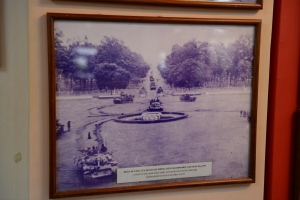 Around 1960, the Hanoi government changed its policy of opposition ot the Diem regime from on of ‘political struggle’ to one of ‘armed struggle’. The National Liberation Front (NLF), a communist guerrilla group better known as the Viet Cong (VC), was founded to fight against Diem. Diem was assassinated in 1963 by his own troops and the Hanoi government ordered the North Vietnamese Army (NVA) units to infiltrate the South in 1964.  In 1965 the USA committed its first combat troops, soon joined by soldiers from South Korea, Australia, Thailand and New Zealand.

As Vietnam celebrated the Lunar New Year in 1968, the VC launched a surprise attach, known as the Tet Offensive, marking a crucial turning pint in the war.  The Paris Agreements, signed in 1973, provided for a ceasefire, the total withdrawal of US combat forces and the release of American prisoners of war.

The USA established diplomatic relations with Vietnam in 1995, and in 2000 Bill Clinton became the first US President to visit north Vietnam.  George W Bush followed suit in 2006, as Vietnam was welcomed into the World Trade Organisation (WTO) in 2007

cam an – thank you

The Word HCMC and Asialife HCMC 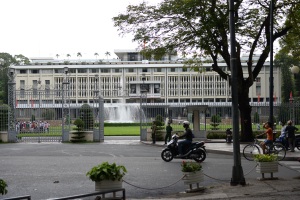 The Independence Palace, also known as Reunification Palace, built in 1996 on the site of the former Norodom Palace, is a landmark in Ho Chi Minh City. Build to serve as South Vietnam’s Presidential Palace today it is known as Reunification Palace. The first communist tanks in Saigon crashed through the gates of this building on the morning of 30 April 1975 when Saigon surrendered to the North.  The building is a timewarp, having been left just as it looked on that momentous day. 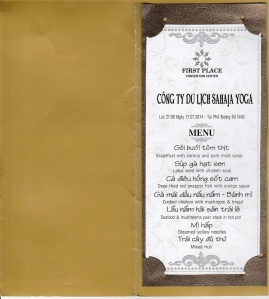 MEKONG DELTA – My Tho and Bến Tre tour

The Mekong is one of great rivers of the world, after winding its way from its source in Tibet this delta-plain is lush with rice paddies and fish harms. It is where boats, houses and markets float upon the endless rivers, canals, streams and mangroves that flow through the region.

It is a source of great wealth. It’s rich silt laden waters enrich the land allowing the bounty of earth to flow, it is the highway linking the country, it is source of drinking water and also the home for tens of million people. The Delta is a land of unending rivers and water, rich lands, coconut and palm tress, a land fat with the riches of Mother Earth.

We all boarded a large boat and travelled up river to visit farmlands and a bee farm enjoying a break from the heat, humidity and pouring rain within a traditional thatched meeting hall. 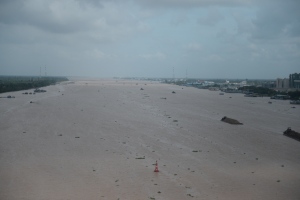 While enjoying jasmin and honey tea and tropical fruit we were privileged to listen to a traditional Vietnamese music playing songs of the National Freedom Struggle and the pride of a people who had won their freedom through a great struggle of independence. The singers seemed like simple people from the local ethnic group. There are over 55 different ethnic groups in Vietnam, from Chinese, the Rhmer, Muslim and a range of tribal peoples.

We spent the day travelling by traditional long boat, rowed by the local villagers, small carts pulled by donkeys, walking along rough hewn paths through rainforests and fields. We watched newly harvested coconuts being  turned into foods of every sort and type, palm oils and the harvesting of fruit. Steamed fish and prawns enjoyed upon a balcony overlooking the swift flowing waters.

My Tho is the capital of Tien Giang province.

Bến Tre is famous for its coconut candy (keo dua).

It is noted for its floating market, rice paper-making village, and picturesque rural canals.

The next morning we rose to depart at 6am for the 40 minute journey from the wharf to the floating Markets to visit the famous floating markets at Can Tho. Half way through our journey the heavens opened and the rain poured onto the Mekong and our little boat, all crowding into the centre of the boat to stay dry and warm. Now we know why the seats were not bolted to the floor.

What is best described as a floating city, a place inhabited by boats of all sizes, shapes and purposes. A long boat pulls up next to ours and a lady in traditional Vietnamese cane hat leans over to sell us steaming cups of Vietnamese black coffee, sweetened with condensed milk, a beverage we all had become quite fond of.

Another boat pulls alongside with a gas fire and large pot of boiling water providing cups of hot noodle soup. A young boy selling tropical fruit from cane basket reaches up offering us his fruit. An old couple  pass in a boat laden with pineapples, stripping their skins and serving up sticks of fresh fruit.  An old men standing on prow of the bow of his boat pulling of his oars as he pushes his boats laden with every type of good and wares. All must somehow navigate through the narrow channels in this floating city on the Mekong. 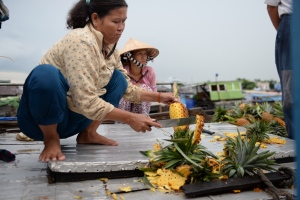 Voices raised either in the barter between buyer and seller or simply navigating their way through this city made up of hundreds of boats. Huge barges pass by carrying river stand and wood for building, or provide the fuel necessary to keep the boats of this city moving. Nets hauled in full of fish ready for the days sale. Young boys paling out water from the bottom of the boats. It is a world unlike anything we had seen before fascinating in how it somehow all works. People can live all their lives in the confines of one small space carved out from this world in the hull of a wooden boat. We then left the floating markets returned to pack and return to our villa at HCMC.

HALONG BAY where the dragon descends into the sea.  Legend says that the islands of Halong Bay were created by a great dragon that lived in the mountains.  As it ran towards the coast, its flailing tail gouged out valleys and crevasses; as it plunged into the sea the areas dug up by its tail became filled wiht water, leaving only pockets of hight land visible.

More than 3000 incredible islands rise from the Gulf of Tonkin, UNESCO World Heritage Site.  The vegetation-covered islands are dotted with innumerable grottoes created by the wind and the waves.

The next morning we could appreciate the beauty of Ha Long Bay from our balconies. It is one of the seven natural wonders of the world. A place of exceptional beauty, beaches, sand and  hundreds of islands of rock outcrops rising vertically from the deep blue waters of the sea. 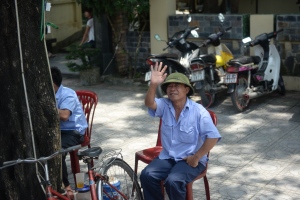 Population 3.7 million on the banks of the Song Hong (Red River) extending out from Ho Hoan Kiem Lake (Lake of the REstored Sword).  Legend has it that in the mid-15th century, heaven gave Emperor Ly Thai To (Le Loi)) a magical sword that he used to drive the Chinese out of Vietnam. One day after the war, while out boating, he came upon a giant golden tortoise; the creature grabbed the sword and disappeared into the depths of the lake. 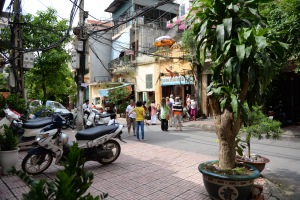 Water Puppetry originated in northern Vietnam at least 1000 years ago by rice farmers.  The wooden puppets being maipulated by puppeteers using water-flooded rice paddies as their stage. Music is played on traditional instruments. 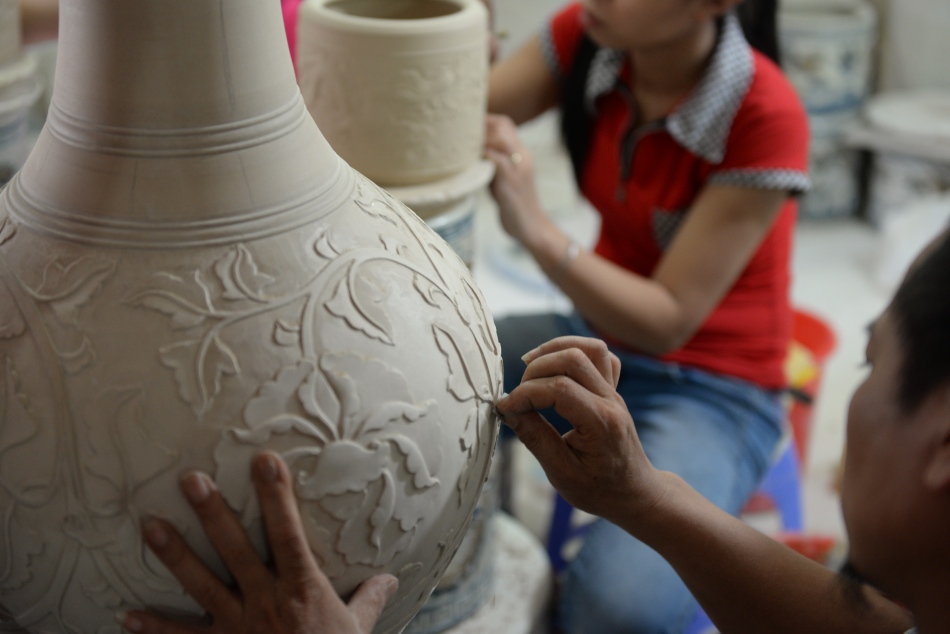 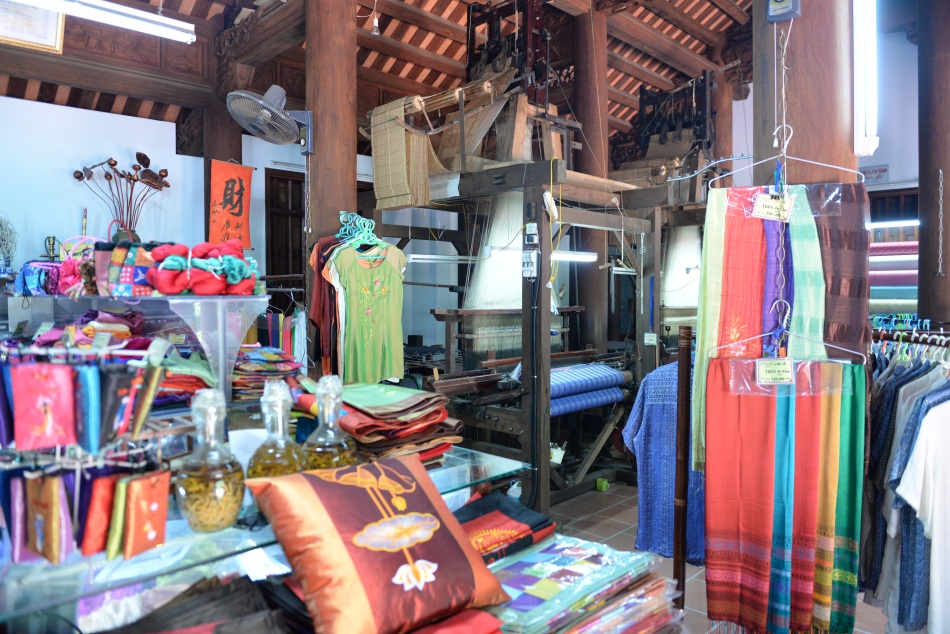 Son La – home of Thai, Muong and H’mong minorities and a historically significant region, which played a role in the Vietnamese struggle for independence early in the 20th-century

Dien Bien Phu – remains of the former French prison and the infamous battle of Dien Bien Phu, the museum and Hill A1