I love a sunburnt country,
A land of sweeping plains,
Of ragged mountain ranges,
Of droughts and flooding rains.
I love her far horizons,
I love her jewel-sea,
Her beauty and her terror
The wide brown land for me!

According to Aboriginal belief, ancestral spirits assumed human forms thousands of years ago to create the world and Australia as we know it. Applying red, yellow, white and black pigments to rock, indigenous Australians began recording tales of this creation period, known as the “Dreamtime,” as early as 50,000 years ago. Over time, they illustrated everything from hunting methods to laws and ceremonies to early contact with Europeans as a means of imparting knowledge to future generations. Today, these ancient canvases represent some of the oldest and longest running historical records of any group of people in the world.

Australia is home to some of the oldest and most prolific collections of rock art in the world, and interpreting these ancient artworks provides valuable insights into our history.

19 Of The Most Beautiful Aboriginal Australian Words

Koala is an Aboriginal word. It is a mispronounced word from the Dharug mob of Western Sydney: Gula/coola/ koolah – which means no water or
no drink. Let’s Make Our Own Koalas.
Activity Sheet from the National Gallery of Australia 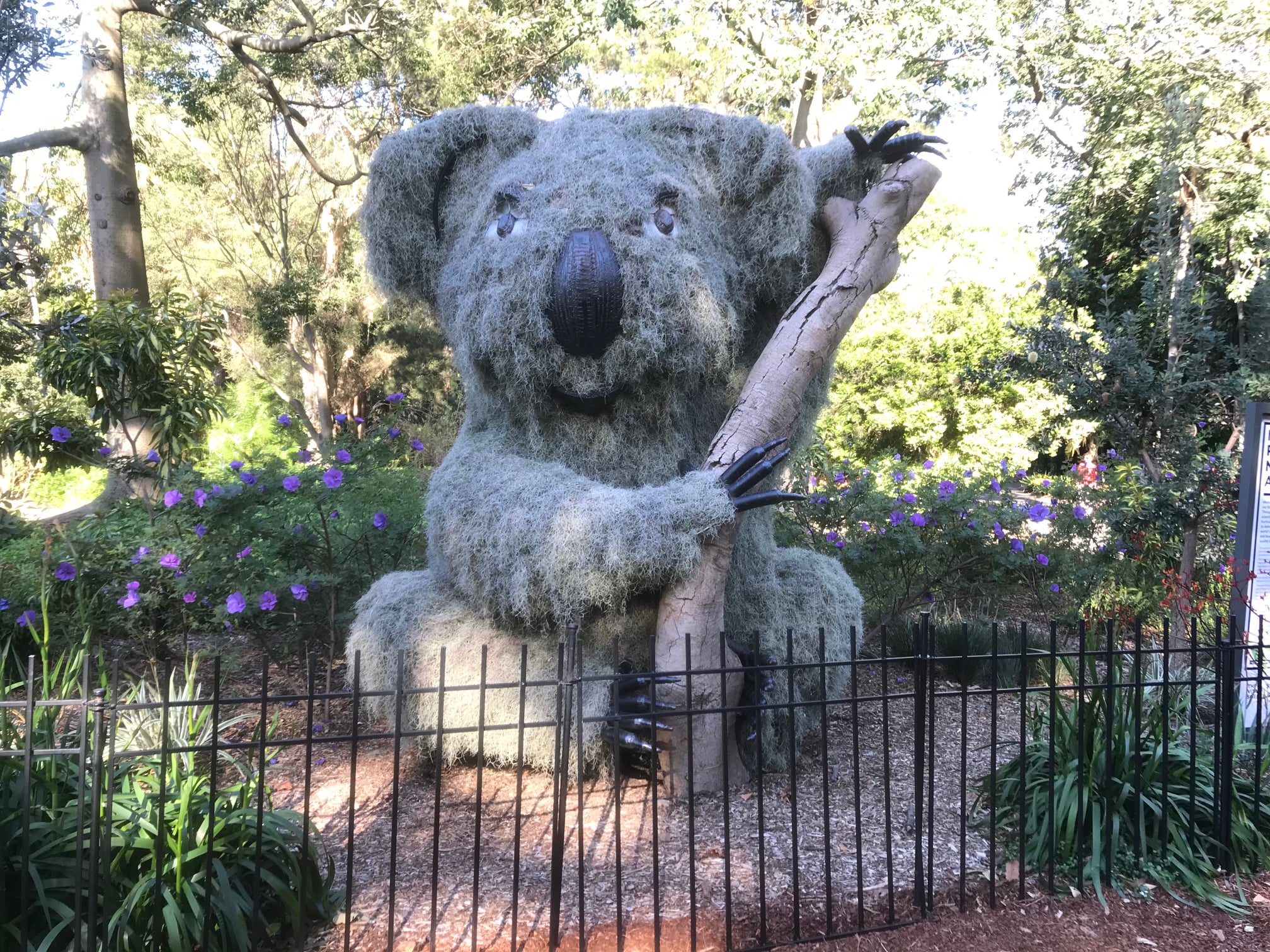 THE 20 AUSSIE SLANG WORDS YOU NEED TO KNOW

Yes, Australians speak English. But it’s a special kind of English that develops when you drag the language halfway across the globe then leave it out in the sun for a couple of centuries. Are you struggling to understand the locals in this land of bloody galahs, barbies in the arvo and choccy bikkies with your cuppa? Then use this dictionary of Aussie slang to help translate. 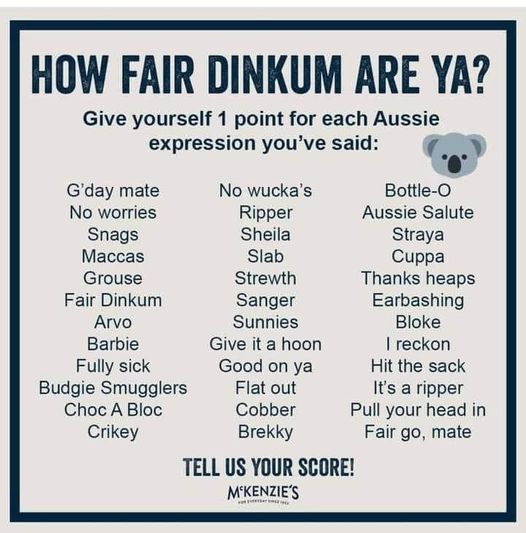 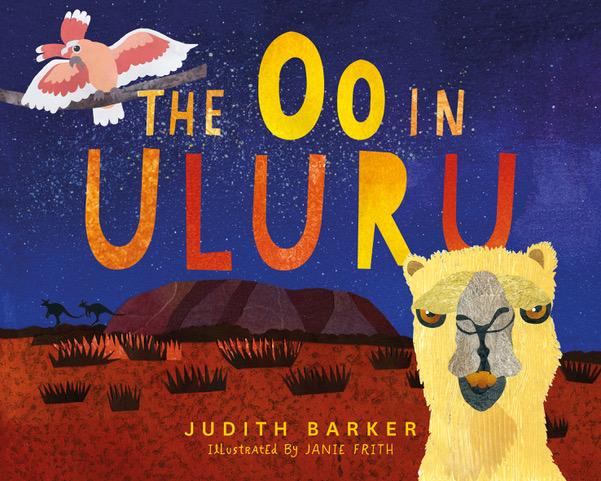 Australia is a country painted with a vivid rainbow of colours and enriched with unique and exotic sounds; it’s a place that dazzles your every sense. Experience it for yourself through our new series of videos that take you on an immersive journey of Australia through 8D audio.

“Eat your vegetables. Take a sweater. I don’t think that’s a good idea. Hmmm”. We don’t want to sound like a naggy Marge Simpson, but this is the stuff you need to wrap your head around if you’re planning to jump behind the wheel for an epic Aussie road trip.

You don’t have to be a Masterchef to whip up a steaming cup of something delicious when you’re staying in a national park. These recipes are so simple and so good, they may even earn you a night off washing up (look, it’s worth a try).

AUSTRALIAN FOOD AND DRINK FESTIVALS WORTH TRAVELLING FOR

The great thing about the Australian food scene is that it’s so different, not only from state-to-state, but it also widely varies from region-to-region within each state. There’s just one teensy, tiny problem – with so many festivals celebrating the unique food culture of Australia, how do you know which ones are worth going to, let alone jumping on a plane for?

ICONIC AUSSIE FOODS THE WORLD IS MISSING OUT ON

Australia’s not just a nation of quirky animals, people and landmarks – Big Banana, we’re looking at you – it’s also a nation of some very interesting food. For the full Aussie experience, don’t miss these ten interesting, delicious foods you can only find in the land down under.

Through breaking news, features, event guides and insight from industry experts, Broadsheet is the authority on the cultural life of your city. We’re here to keep you across the goings on around town and to cover, analyse and comment on it all with accurate reporting, sharp photography and clear, clean design. 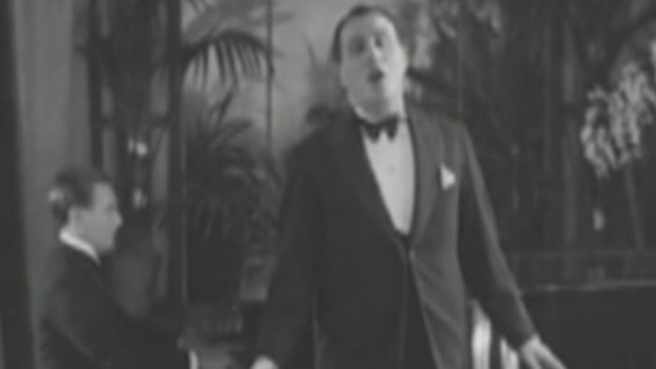 ABC Arts: Girt by Sea, An Archival History of the Australian Coast

Recently overseas friends have been asking about travel info for Australia and for your interest I have put some general info here:

HOW DOES THE AUSTRALIAN WALKING TRACK GRADING SYSTEM WORK?

TEN CHEAP, EASY AND HEALTHY MEALS YOU CAN WHIP UP IN A HOSTEL KITCHEN

You don’t have to be a MasterChef contestant to knock up these budget meals for two.
QANTAS TRAVEL INSIDER

Interesting information about Australia on All Down Under

There are a few visual cues that mark the beginning of summer in Australia. Jacarandas blossoming on suburban streets. Cricket replacing footy on local ovals. Backpackers sunburning on crowded beaches. And big screens popping up in parks and on rooftops around the country, preparing for another summer of outdoor cinema. Because what better way to spend a balmy evening than under the stars watching your favourite flick? 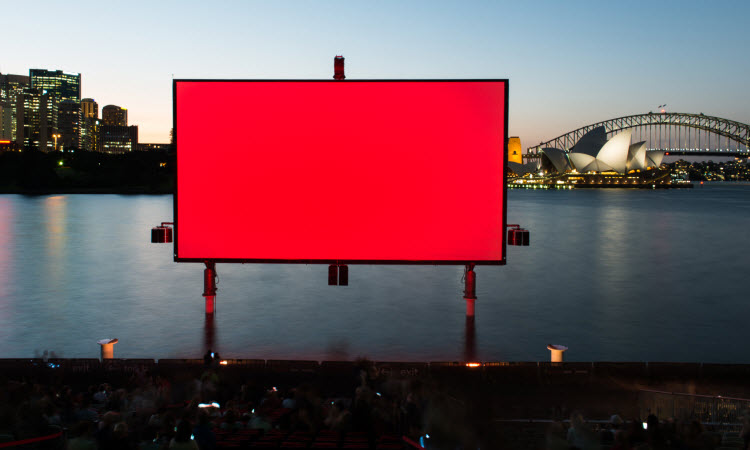 As if golf didn’t take long enough to complete as it is, Australians have created a course that takes four days to play. Stretching 1365 kilometres from Ceduna in South Australia to Kalgoorlie in the West, the Nullarbor Links is a great way to break up the tedious journey on the long drive across the desert heartland of Australia.

Though it’s forbidden to get too close to whales, special permission has been granted to a number of tour operators on the Great Barrier Reef. Passive diving, in which the whales are the ones who need to initiate contact, allows you to get up close to majestic giants of the sea. If you’re lucky, you can be just metres away.  The Minke Whale Project

Did you know that Australia is home to the oldest living organism on the planet? The stromatolites in the Shark Bay World Heritage Area are estimated to be between 2,000 and 3,000 years old, and provide a unique insight into the origins of life.

Travel on the longest stretch of straight rail:

The Indian Pacific travels from east to west on the longest straight stretch of railway track, coming in at a massive 478 kilometres in length. On the journey you’ll get to experience the magic of our great southern land, all in air-conditioned comfort.

A must-see on the route around Australia, Fraser Island the world’s largest sand island – comprised of sand that has accumulated over 750,000 years. It’s home to over 100 freshwater lakes, and dunes that reach up to 260 metres above sea level.

Travel down a horizontal waterfall:

The Horizontal Falls, also known as the Horries, is a natural phenomenon in the Kimberley region of WA. Despite the name it’s not actually a waterfall, but rather a fast moving tidal flow between two narrow, closely aligned gorges. Still, we think it looks pretty spectacular and should be a must see on any Kimberley itinerary.

Drive around the world’s smallest continent:

Coming in at more than 24,000 kilometres, Highway 1 is the world’s longest national highway and allows you to circumnavigate Australia. Though we’re often called the world’s largest island, the jury is out on this claim as technically Australia is a continent and not an island. Either way, Australia still makes for an epic road trip.

We know the east coast is where it’s at when it comes to iconic Australia – pristine white sand beaches, jaw-dropping coral reefs and dense, lush rainforests are just a few of the many things you can find along the way. If you’ve been wondering where on earth to start your dream trip, what to see along the way and where to rest your sleepy head after all your adventure-filled days, YHA’s got you sorted.

Discover some of Australia’s hidden gems.  Turn your road trip into an experience you’ll always remember, with adrenaline pumping adventures, amazing food stops for a classic pub feed, and locations so beautiful they’ll keep you mesmerised. For a road trip large or small, pack the car and let’s go!

The big city is dazzling, but there’s nothing quite like spending some time in a small town. The air is fresh, the locals are friendly and welcoming and there are endless unforgettable experiences to be had that should attract hordes of tourists, but don’t. When you take the road less travelled, you can swim alongside the world’s biggest fish species, fly across the treetops in a lush rainforest and eat some of the best and freshest food in the country. Here are the 10 best Australian towns you’ve never heard of, but should most definitely consider visiting.

With travel to and from Europe taking a ridiculously long time, grape vines were brought to Australia on the First Fleet. The first plantings were in the Hunter Valley around 1830. In the 1860’s, a grape root louse called Phylloxera wiped Europe’s vineyards. As a result, Australia possesses the oldest on-root vines in the world. 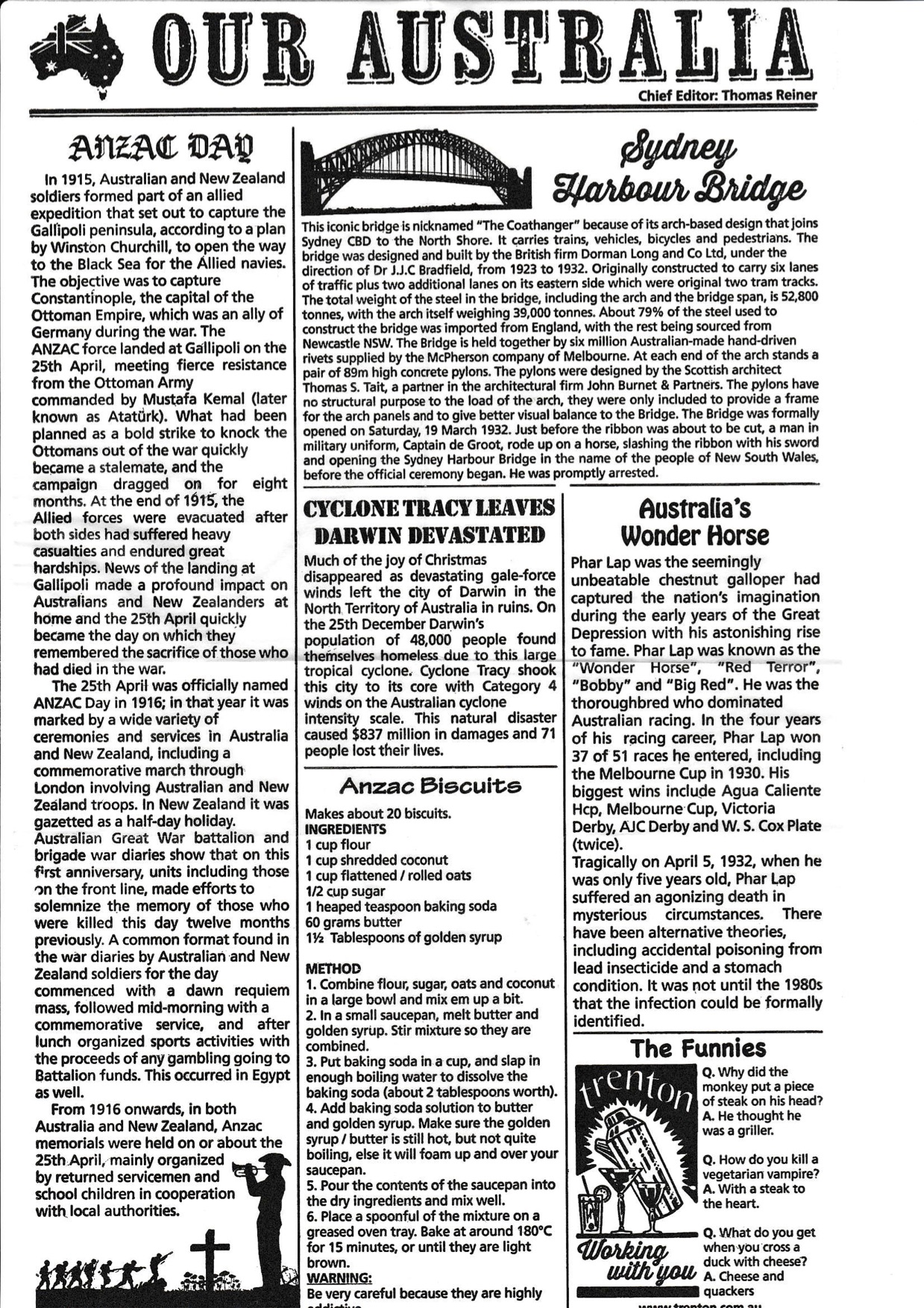 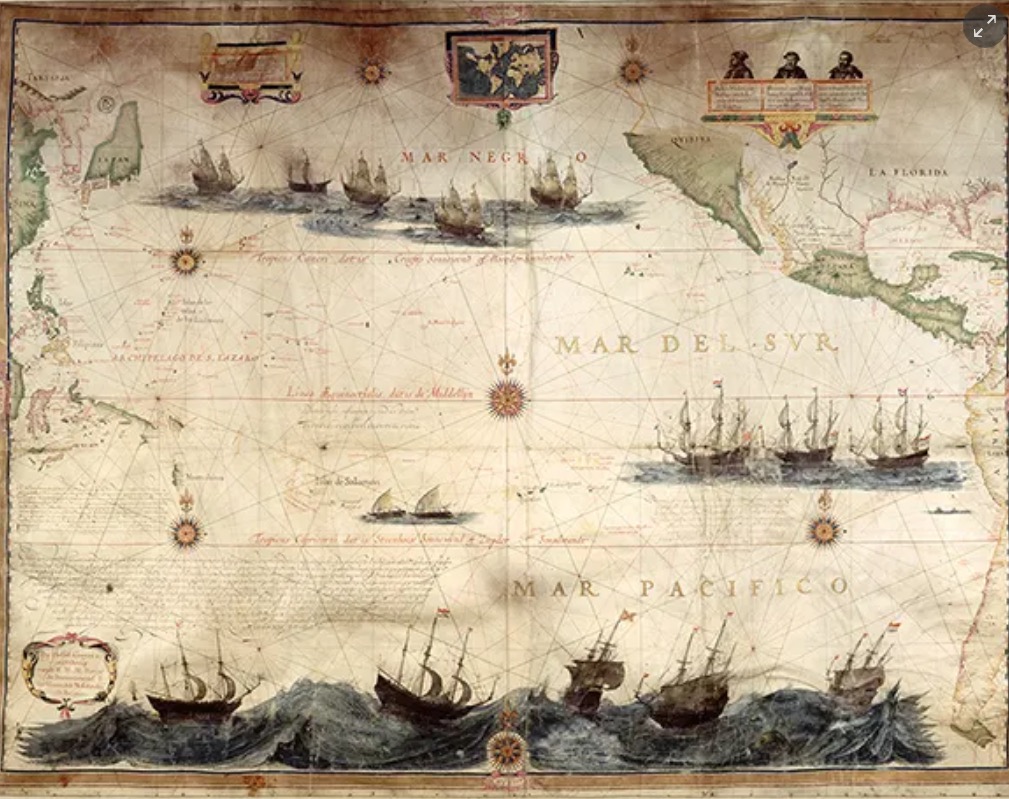 Hessel Gerritsz, Map of the Pacific, 1622

Dutch navigator William Jansz in the Duyfken explored the est coast of Cape York in 1606, not realising that this was the Australian mainland.

Terra Incognita: maps that shaped the world – in pictures 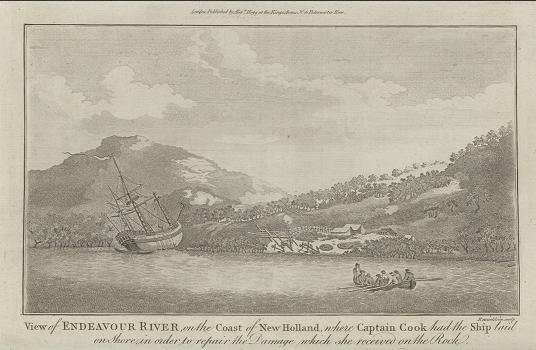 Endeavour beached at Endeavour River for repairs after her grounding on the Great Barrier Reef in 1770. By Johann Fritzsch, published 1786. 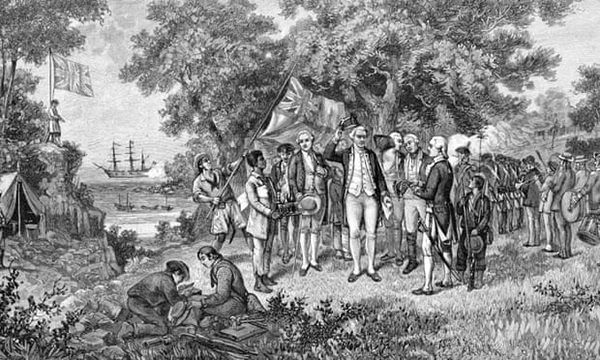 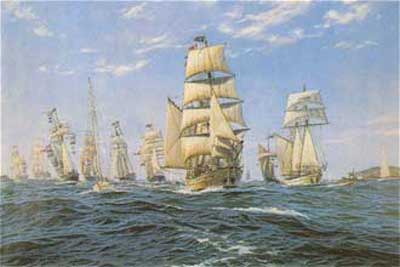 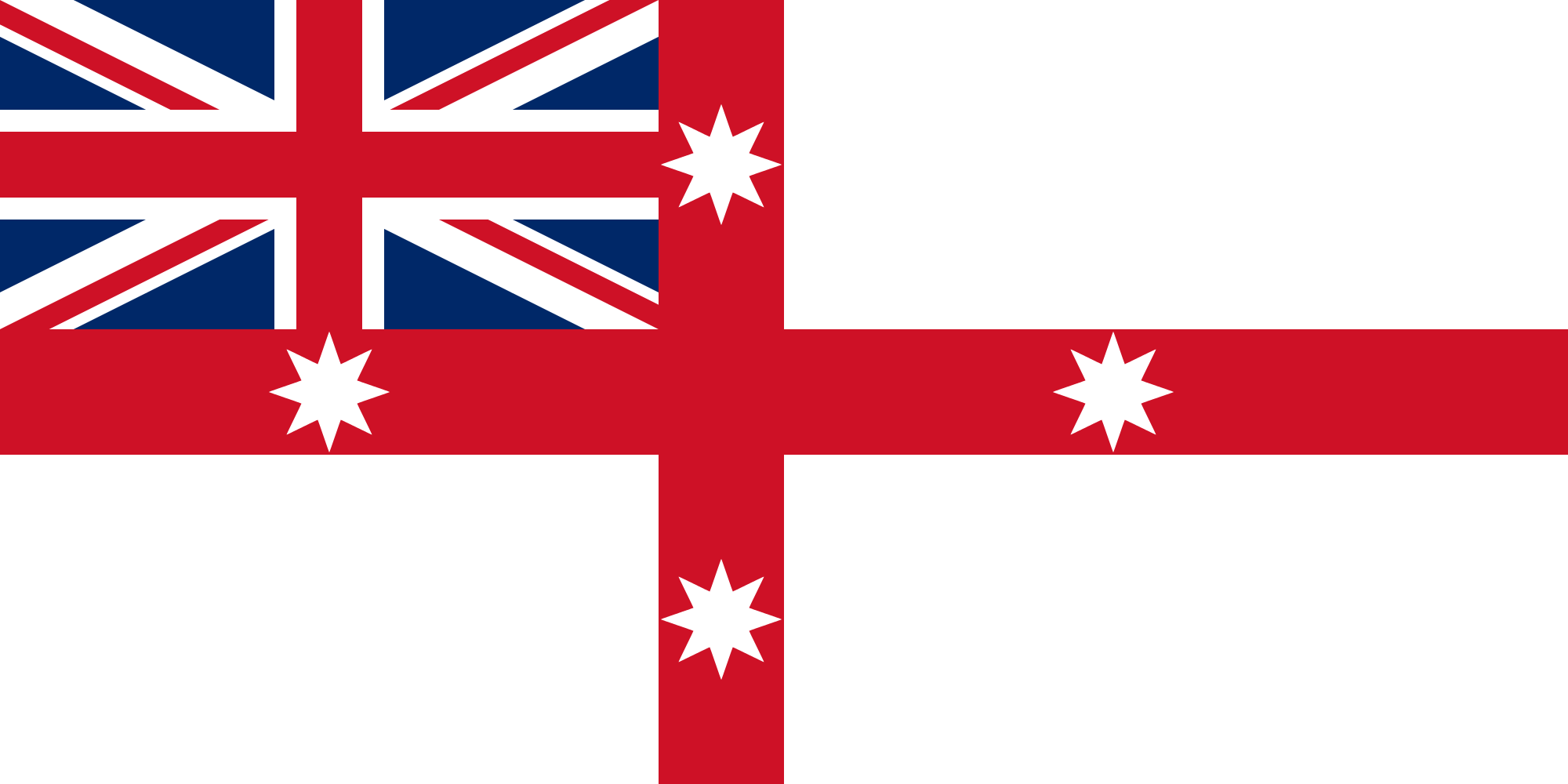 National Colonial Flag for Australia (8123-4) The Southern Cross featured on this first attempt by Captains Bingle and Nicholson to create a natinal flag. 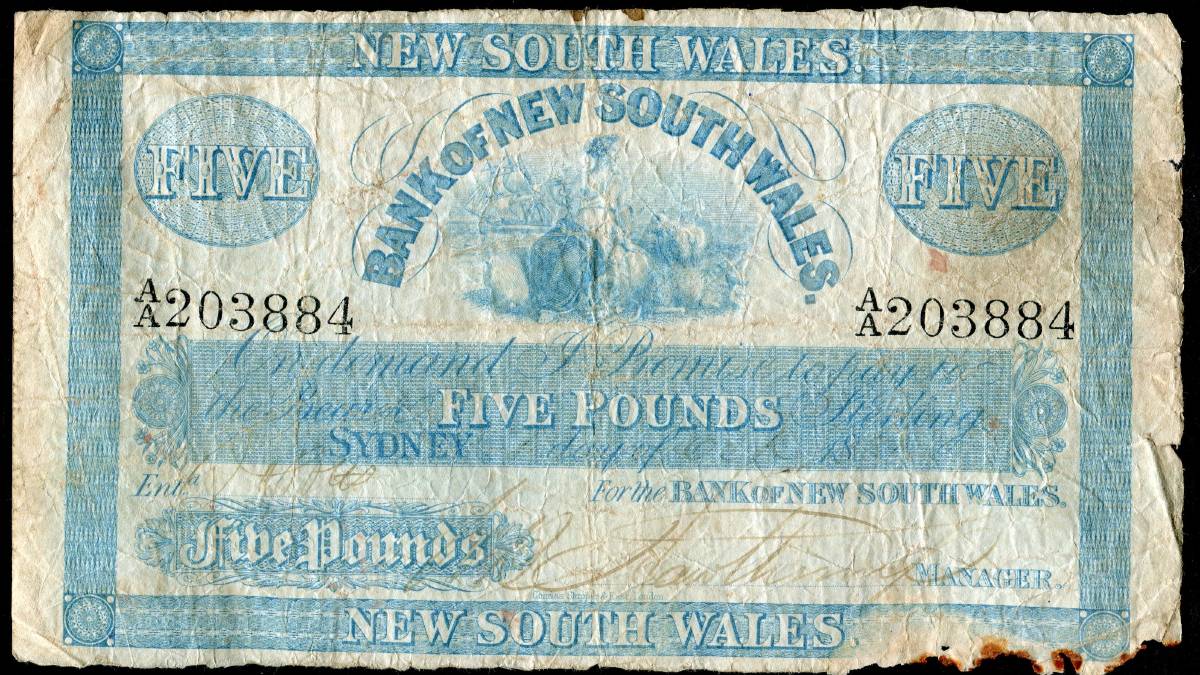 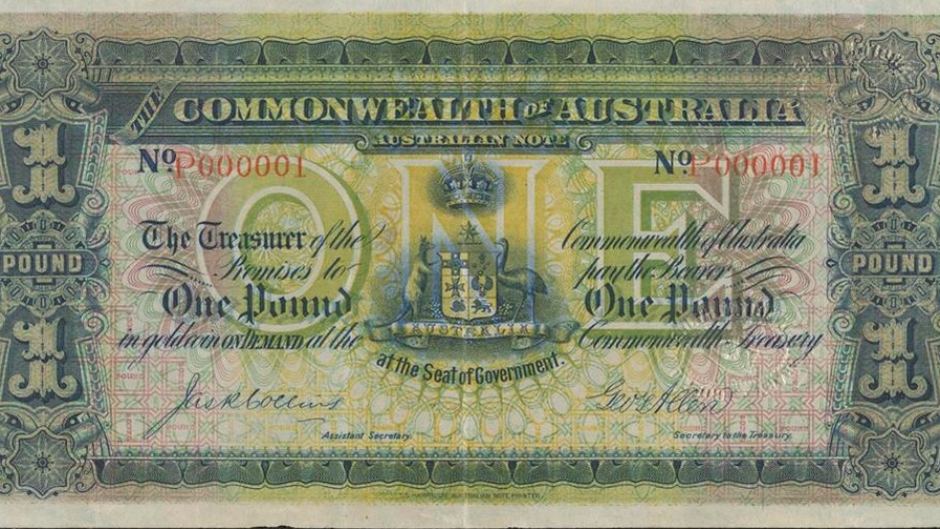 THE first banknotes to circulate in the colonial days in Australia were issued by private banks. The Bank of New South Wales was the first after Governor Macquarie decided to form the financial institution. This week’s image is a genuine Bank of New South Wales five-pound note that was issued on October 6, 1866, just one of a series of denominations issued by the bank. 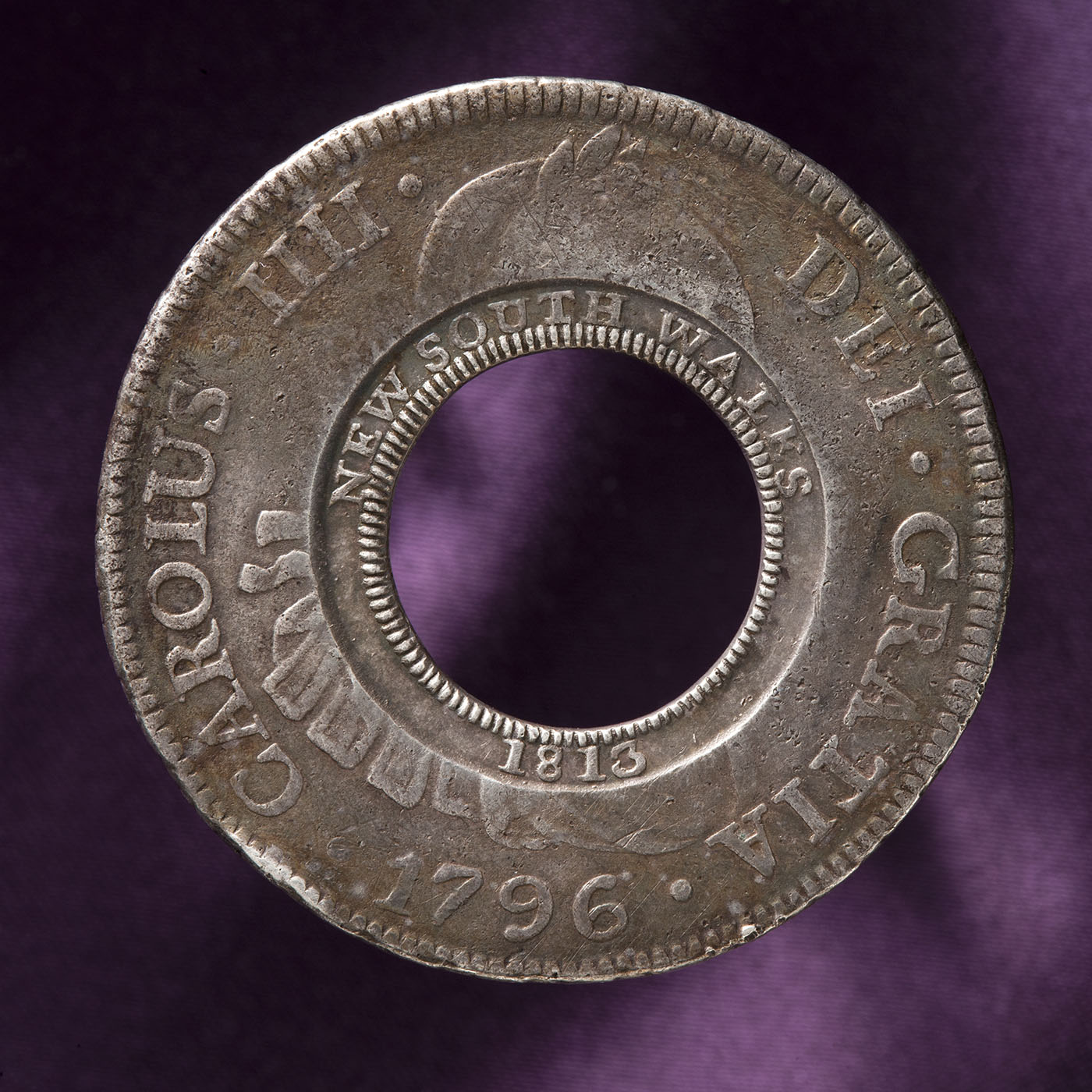 The holey dollar was created to address a shortage of coins in the new colony. Governor Lachlan Macquarie imported 40,000 Spanish reales in 1812 and had convicted forger William Henshall cut the centre out of each, to double the number of available coins. The coins were counterstamped and the outer ring became known as the holey dollar, with the centre renamed the dump. 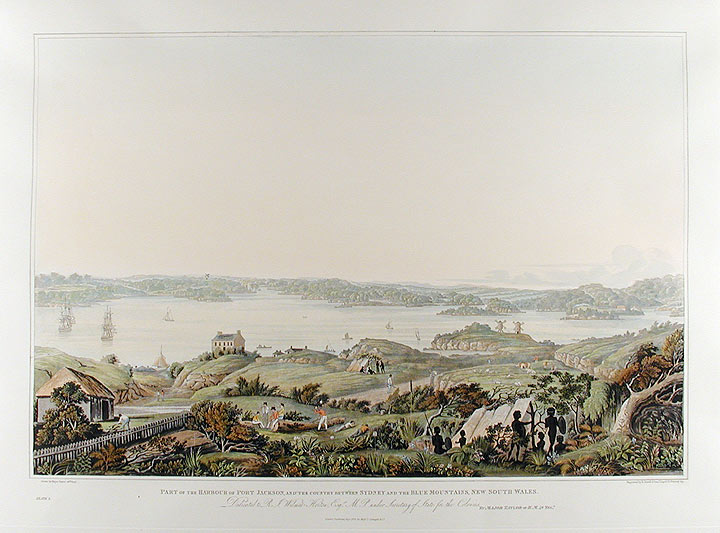 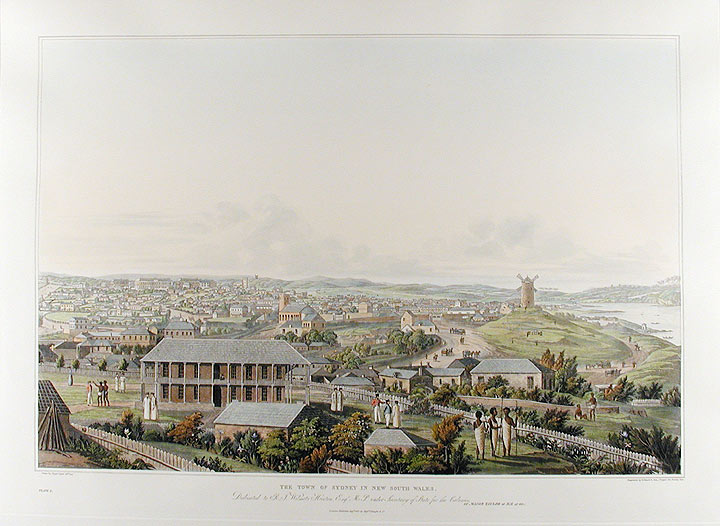 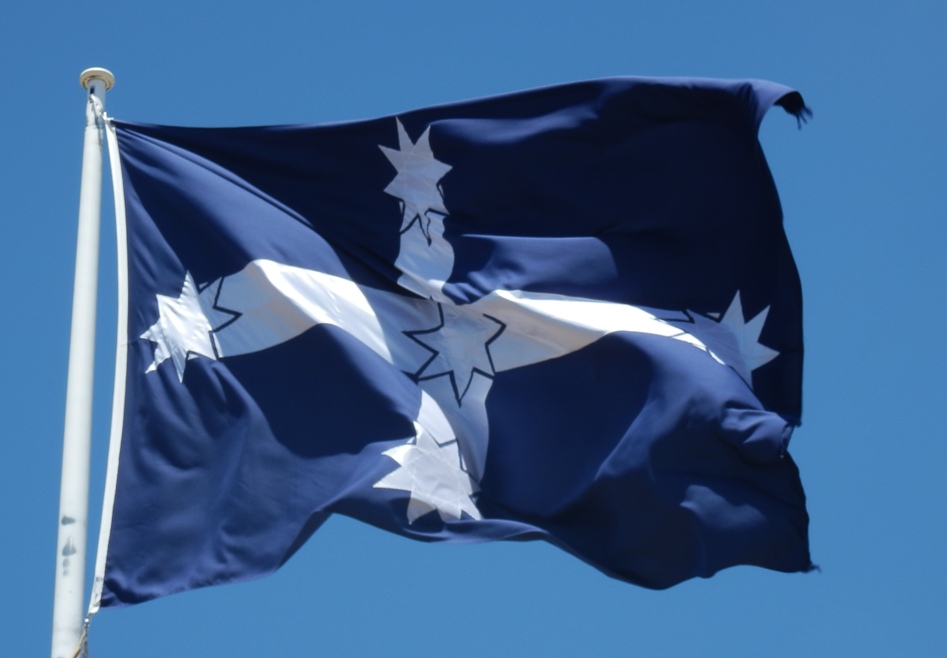 This Southern Cross flag was based on earlier designs used in the Australian colonies. It was used as the battle flag of the Eureka Stockade in 1854. Captain Charles Ross of Toronto, Canada is said to be the designer of this flag. The rebellion was led by Peter Lalor who in later, life became Speaker of the Parliament of Victoria. Trooper John King retained a portion of the flag after the miners’ stockade was over-run on 3 December, 1854 and this remained in the King family’s possession until 1895. Today the remnants of the design are on display at the Ballarat Fine Art Gallery in Victoria. 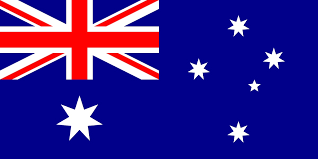 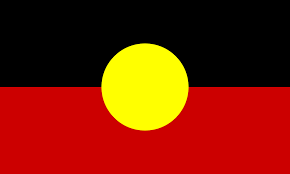 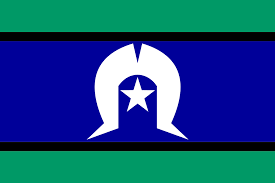 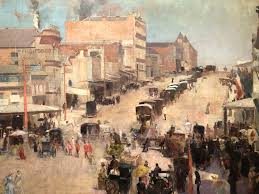 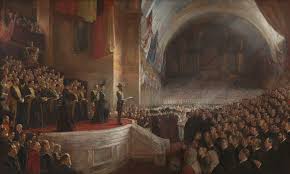 Tom Roberts The Opening of the First Federal Parliament 1901 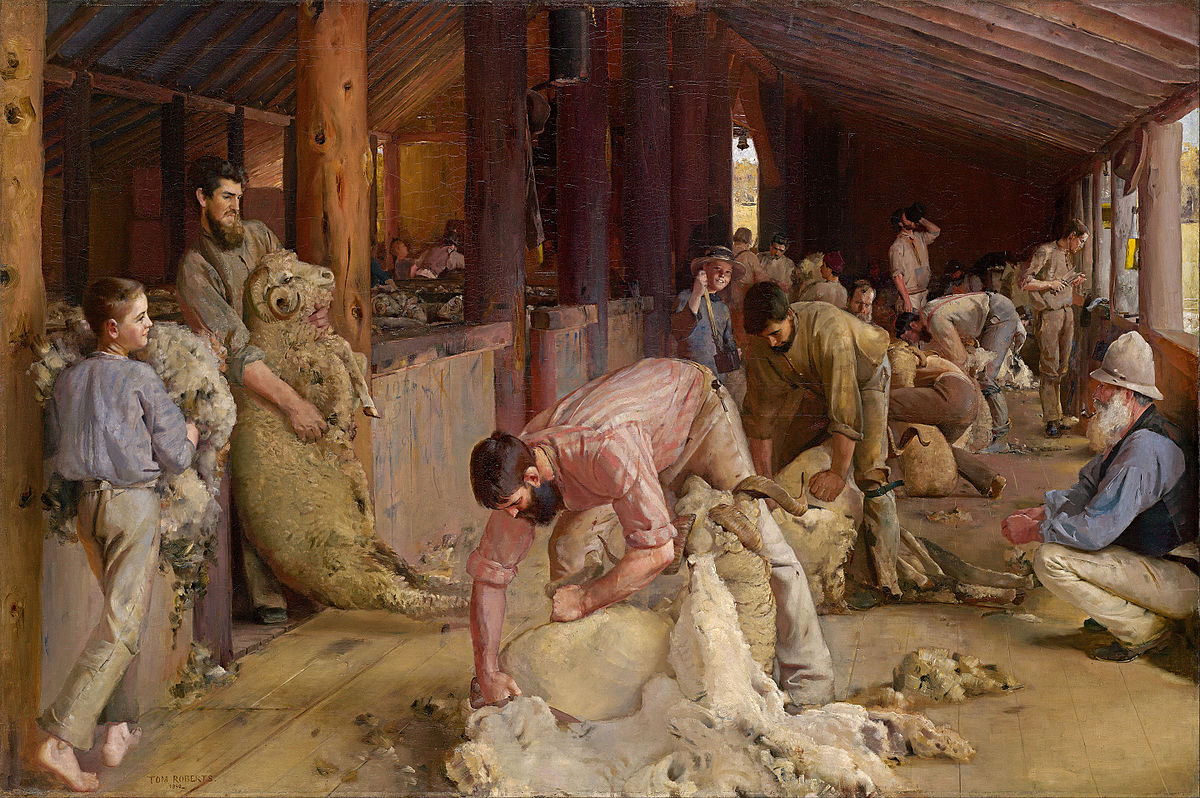 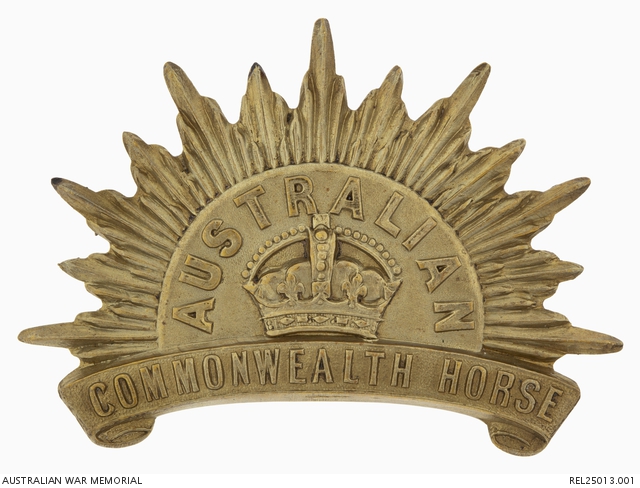 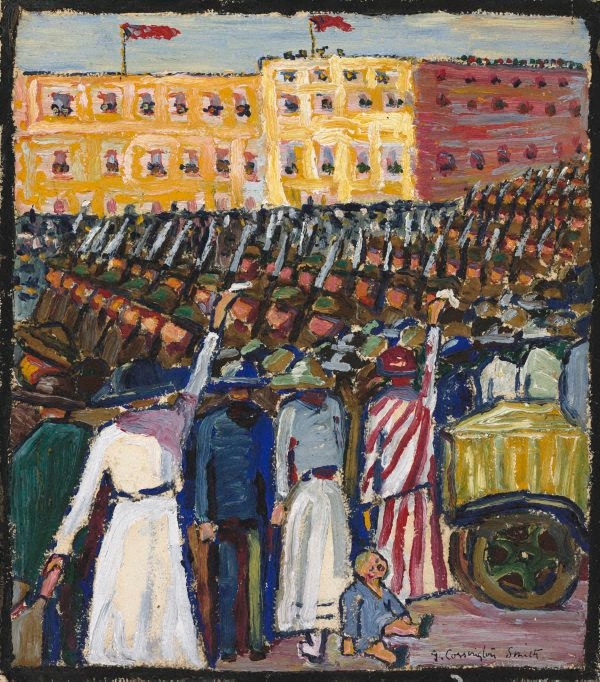 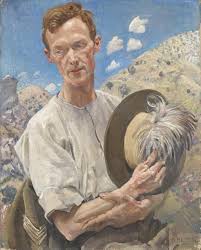