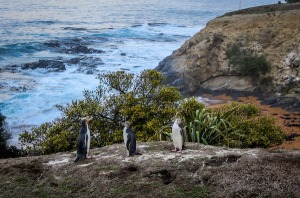 In 1975,  in my early 20′, I was fortunate to be employed by the New Zealand Government Tourist Office as part of an exchange with Australia. While in New Zealand I worked in good hotels located in some interesting locations. I joined the International Youth Hostel Association,  of which I am now a live member and  travelled much of the country. This included from Ninety Mile Beach at the top of the North Island to Stewart Island below the South Island.

At less than 2000 square kilometres, Stewart Island is a fraction of the size of New Zealand’s North and South Islands – but that doesn’t stop it from claiming the title of the country’s third largest isle. And while a mere 400 people call Stewart Island home, there’s still plenty of other residents for visitors to get acquainted with, including the largest population of native birds in New Zealand. Not interested in the local wildlife? No problem. From bushwalking and boat cruises to restaurants, hotels and bars, Stewart Island has something to offer everyone who crosses the Foveaux Strait.

I discovered hiking while working at Chateau Tongariro in the Tongariro National Park where a group of us hiked to the crater of Mt Ruapehu. Also while there working there I experienced the sounds of Mt Tongariro erupting and filling the sky with ash.  I enjoyed my first skiing lessons at Mt Cook, earth tremors in Queenstown and saw the amazing glaciers of Franz Josef and Fox on the West Coast of the South Island. While working in Christchurch I woke to the beauty of snow covered streets. Early in my travels I meet Gillian, 25 April 1975, we travelled together and are now life long friends. One of our adventures included a hike across Steward Island with friends,  staying in overnight huts and seeing the most amazing sand dunes.

The New Zealand capital, Windy Wellington, about a third of the size of Auckland is perched on the edge of a picturesque harbour.   Across Cook Strait, which separates the North and South Islands the small seaport of Picton is the gateway to the stunning Marlborough Sounds.  The bird sanctuary of Motuara Island in the outer Queen Charlotte Sound and Ship Cove which is the starting point of the famous Queen Charlotte Track.

7 NEW ZEALAND ISLANDS YOU NEVER KNEW EXISTED
There’s more to New Zealand than North and South. New Zealand may be best known for its two main islands, but with over 600 hundred separate isles in its archipelago, there’s plenty more to discover beyond the mainland.

TONGARIRO  Consisting of three huge volcanoes:  Ruapehu, Ngauruhoe and Tongariro, the park has bee a favourite with hikers and landscape lovers for a century.  However, Ruapeahu’s starring role as Mount Doom in the Lord of the Rings film trilogy saw the park’s popularity boom. Ruapehu clocks in the biggest and most restless volcano, although Tongariro was the last to erupt in august 2012.

The constant volcanic activity in the park draws visitors in their thousands with the Tongariro Alpine Crossing considered one of the best day-walks in New Zealand, the most popular trek with its fuming vents, thermal lakes and crater hikes.

Pack some snacks, good tunes, and your choice of road trip companion. We’ve put together the ultimate Central Plateau road trip to show just how much cool stuff is packed into the area! We’ve styled this article as if you’re driving south from Auckland, but you can switch it up and head north from Wellington as an alternate route. The road is your oyster!

Auckland’s biggest volcanic force in the area is Rangitoto, 600 years old, jutting from the harbour. Auckland’s highest volcano, Mt Eden, has some of the best panoramic views over Waitemata Harbour.

Hammer Springs, alpine village in the South Island, is known for its thermal pools warmed by the earth’s toasty core.  The rainwater-to-hot-springs process takes 173 years.

Rotorua, big bubbling and built for tourists with sinter terraces and spouting geysers throughout the area. Pohutu, the southern hemisphere’s largest active geyser which blasts up to 30 meters hight around twenty times a day. Craters of the Moon geothermal walk or the largest hot-water waterfall in the Southern Hemisphere at Tikitere. Over 20 hectares of hot pools, steaming lakes, cooking pools, bush walks and mud volcano.

Tongariro National Park, World Heritage Status in 1993. Consisting of three huge volcanoes: Ruapehu, Hgauruhoe and Tongario with Ruapehu’s staring role as Mount Doom in the Lord of the Rings, being the biggest and most restless volcano, although Tongariro was the last to erupt in August 2012.

Mount Ngauruhoe  most recent eruption was in 1974 while I was working there.

Among its highlights are steaming vents and hot springs, old lava flows, beautiful water-filled explosion craters and stunning views. On clear days you can see Mount Taranaki in the west, Mount Ngauruhoe, the Kaimanawa Ranges, Lake Taupo and beyond.

White Island in the Bay of Plenty about 50 kilometres offshore. One of the world’s most accessible marine volcanoes and the white smoke that bellows from the greater fumes at around 800 degrees.

Natural Hot Springs that are free

Keen to strap a few necessities onto your back and hit the tracks through some of New Zealand’s native forests, lakes, rivers, mountain peaks, gorges and valleys? Join in the love affair with the great outdoors and discover one or more of the Department of Conservation’s Great Walks. Check out our perfectly located Great Hostels for Great Walkers.